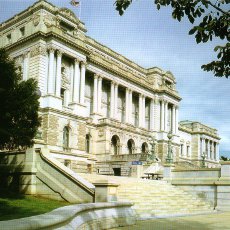 Established officially in 1897, the Music Division of the Library of Congress flourished under the leadership of Oscar George Theodore Sonneck. By Sonneck’s time, the Music Division had acquired nearly half a million music items: music manuscripts, printed music, correspondence and other literary manuscripts, books, pamphlets, concert programs, posters, playbills, newspaper and magazine clippings business records scrapbooks, photographs, drawings, etchings, paintings, bronze and plaster busts, certificates, citations, medal and honors, audio and video recordings, and all manner of artifacts, such as a lock of Beethoven’s hair, George Gershwin’s first metronome, and Victor Herbert’s death mask. The holdings of the Music Division presently offer resources for music scholarship unmatched anywhere in the world. The story of the Music Division would be incomplete without special mention of two unique women, Elizabeth Sprague Coolidge and Gertrude Clarke Whittall. Elizabeth Sprague Coolidge expanded the vision and mission of the Library of Congress by sponsoring concerts, commissioning the composition of new music, and encouraging musical scholarship. Gertrude Clarke Whittall, another avid supporter of chamber music, presented to the Library in 1935 and 1936 five Stradivari instruments. She also provided an endowment fund to ensure professional use and maintenance of the instruments. Like Mrs. Coolidge, Mrs. Whittall presented original manuscripts to the Music Division, works in the hand of such composers as Haydn, Mozart, Beethoven, and Brahms. Many other philanthropic individuals and organizations have also followed their leads in donating. The breadth and depth of the Music Division’s collection challenge the imagination. A century ago Librarian of Congress John Russell Young wrote in his annual report (1898) that, “his new department of music’s growth thus far has resulted in the foundation of what is destined to be one of the great musical libraries of the world.” How right he was. (Music, Theater, Dance: An Illustrated Guide, available from the Government Printing Office, tells the story of the Music Division and gives some sense of the magnitude and importance of this great national treasure. Information in this essay derives from the guide, published in 1993.)