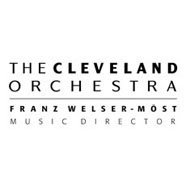 Long considered one of America’s great orchestras, The Cleveland Orchestra stands today among the world’s most-revered sym­phonic ensembles. In concerts at home in Severance Hall; at its summer home, Blossom Music Center; and on tour, The Cleveland Orchestra continues to set standards of performing excellence and imaginative programming that serve as models for audiences and performers alike. The Cleveland Orchestra was founded in 1918. Its music directors have included Nikolai Sokoloff (1918-1933), Artur Rodzinski (1933-1943), Erich Leinsdorf (1943-1946), George Szell (1946-1970), Lorin Maazel (1972-1982), and Christoph von Dohnányi (1984-2002). Since September 2002, Franz Welser-Möst has served as The Cleveland Orchestra’s seventh music director. Under his leadership, the Orchestra has become one of the most sought-after performing ensembles in the world, offering a celebrated series of concerts at home in Severance Hall featuring a wide-ranging repertoire, and touring extensively to critical acclaim. The partnership has earned the Orchestra unprecedented residencies in the United States and in Europe, including one at the Musikverein in Vienna, the first of its kind by an American orchestra. The Orchestra also regularly appears at European festivals, including residencies at the Lucerne Festival, and has toured coast-to-coast in the U.S., including regular performances at Carnegie Hall. In January 2007, the Orchestra began its 10-year residency project in Miami, Florida, at the new Carnival Center for the Performing Arts (recently renamed the Adrienne Arsht Center for the Performing Arts of Miami-Dade County).

Listen to Cleveland Orchestra, The